I'm considering looking for a Cagiva Mito (later model), and wanted to hear some opinions from owners or people familiar with them.

Can you get what you need to keep them running?

Is the overall quality decent?

Another similar cycle I'd consider would be a newer Aprilia RS125 (2009) if it was able to be registered and plated.

What do you guys think?
1 x
Top

Both of them could be awesome

I almost bought a mito but I wanted a four stroke to ride every day to work so i took a RS4 instead.
But I dont know anything for the maintenance or the quality of these bikes unfortunately
1 x
Top 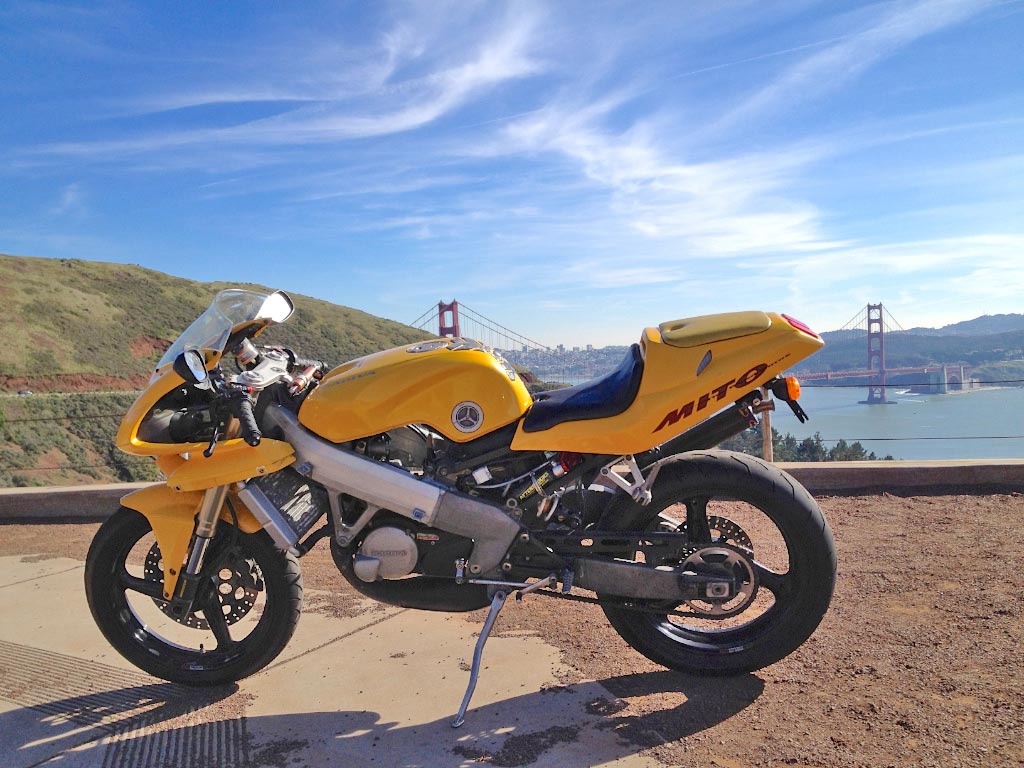 Actually like B says both bikes are fantastic, and I can understand an argument for having each.

I have a Mito, and it is truly one of my favorite bikes. When I first got it fully running I liked it a lot, but it wasn’t until I became a better rider, by working hard on the Derbis, that it really turned into one of my all time favorite bikes. It is better made than the Derbi in most ways.

They are two strokes, and come with all that it implies—you do want to maintain them. They are fairly easy to work on. A bit more complicated than the Derbi since there is a power valve. The seven speed gear box is great. Even still I try to go to eight once in a while.

On mine I put a 28mm carb from a KX100 Kawasaki. At the time it was the easiest way to get a PKW carb in that size. Now there are lots of companies that make PKW copies is 28mm, so they are readily available. This made the bike much easier to tune, and way more ridable on the street. It also has the benefit of putting less stress on everything, thus ensuring a longer lasting package. I did leave the autoluber on it.

I don’t ride the Mito as hard as the Derbis, because you don’t have to ride it as hard. But I suppose you could ride it hard. The problem is that it is fast enough that it could get you into a lot of trouble quickly.

In general I’ve found the people that have Mitos tend to be more passionate about them than the folks that have the RS. Not sure why that is, but it seems to be the case. I haven’t tried to buy parts for mine in over ten years so I don’t know what it would be like today. Wisco probably still makes pistons for them—that’s what I have in mine. Top ends are probably becoming rare.

The RS is a great bike too. If you find either one you’ll probably be in love with it.

Man - your Mito sure looks nice!

I really like it without the fairing lowers on it. Shows the engine and frame and the overall visual balance is excellent.

Will there be the same issues with registering and plating a Mito as there would be with a RS?

What would you say a decent Mito would set me back?

Thanks, I prefer my bikes with the skirts on, but when tuning them I find it easier to leave the skirts off. I have no idea what prices they might for for at the moment. Look through the Market Place listings, there should be a few Mitos in there to give you some idea of what they’ve gone for somewhat recently.

I was lucky with mine, but I sunk a lot of money into it upgrading the suspension on both sides, the wheels, the chain/sprockets (415), top end, carb, brakes. I do need to replace the front disc, and I'm going to fit an RCS-15 master on it—it was all worth it. The Mito is a fantastic bike, and other than the RS there really isn’t anything out there that can touch it.

In Michigan I would expect it to be pretty easy to register the Mito. I didn’t really have any issues in SF. Just had to visit the DMV, CHP, and back to the DMV, but eventually it was all worked out, and there is always Vermont.