Create a thread about your bike.
Post Reply
45 posts

During run-in I've finally found the reason for random idle irregularites... There was an air leak (of course) and a major one. It always looked to me like rubber intake doesn't hold carb firm enough, no matter how far it's pushed in or how tight the clamp is screwed. The reason was stupid, carb wasnt properly seated. It has to be tilted slightly and only than it slide all the way in and allow clamp to grip it tightly! 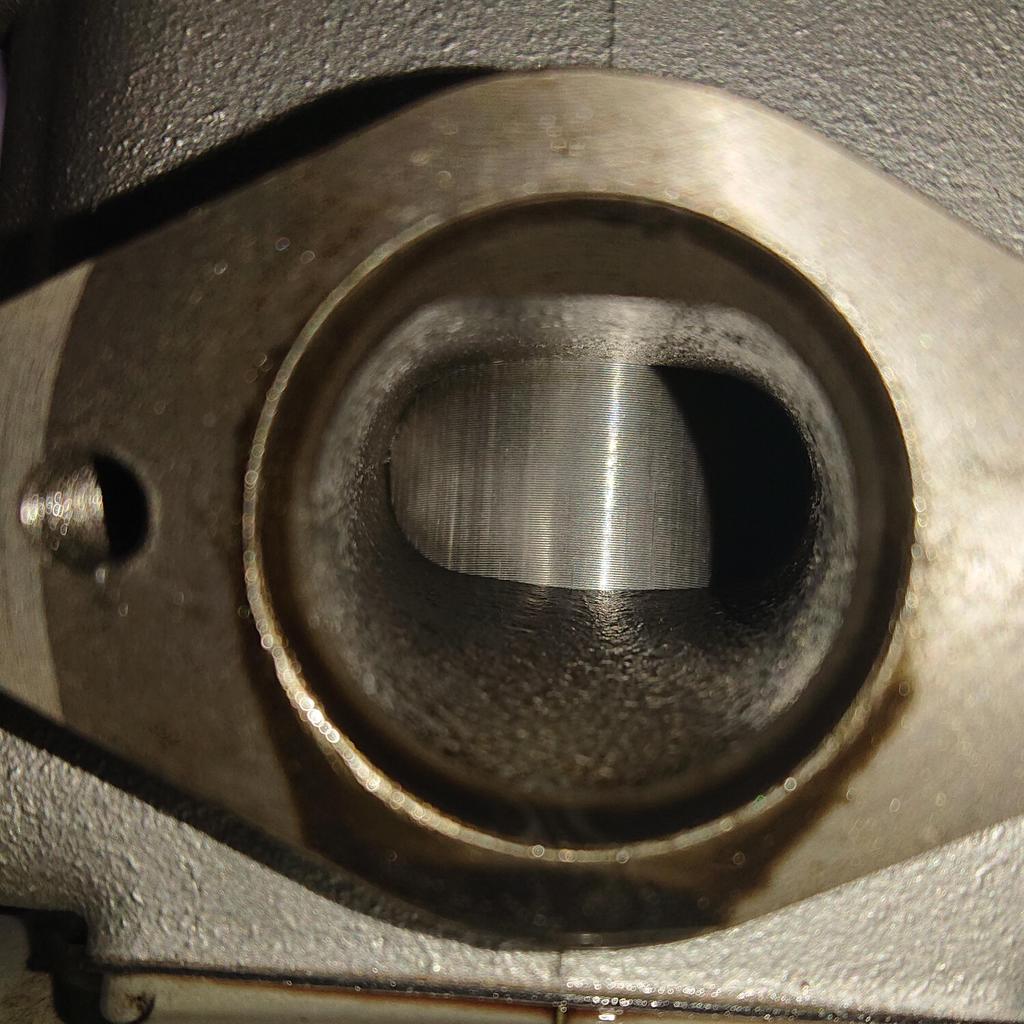 Inside there is some scoring, but I'm not sure how serious this is: 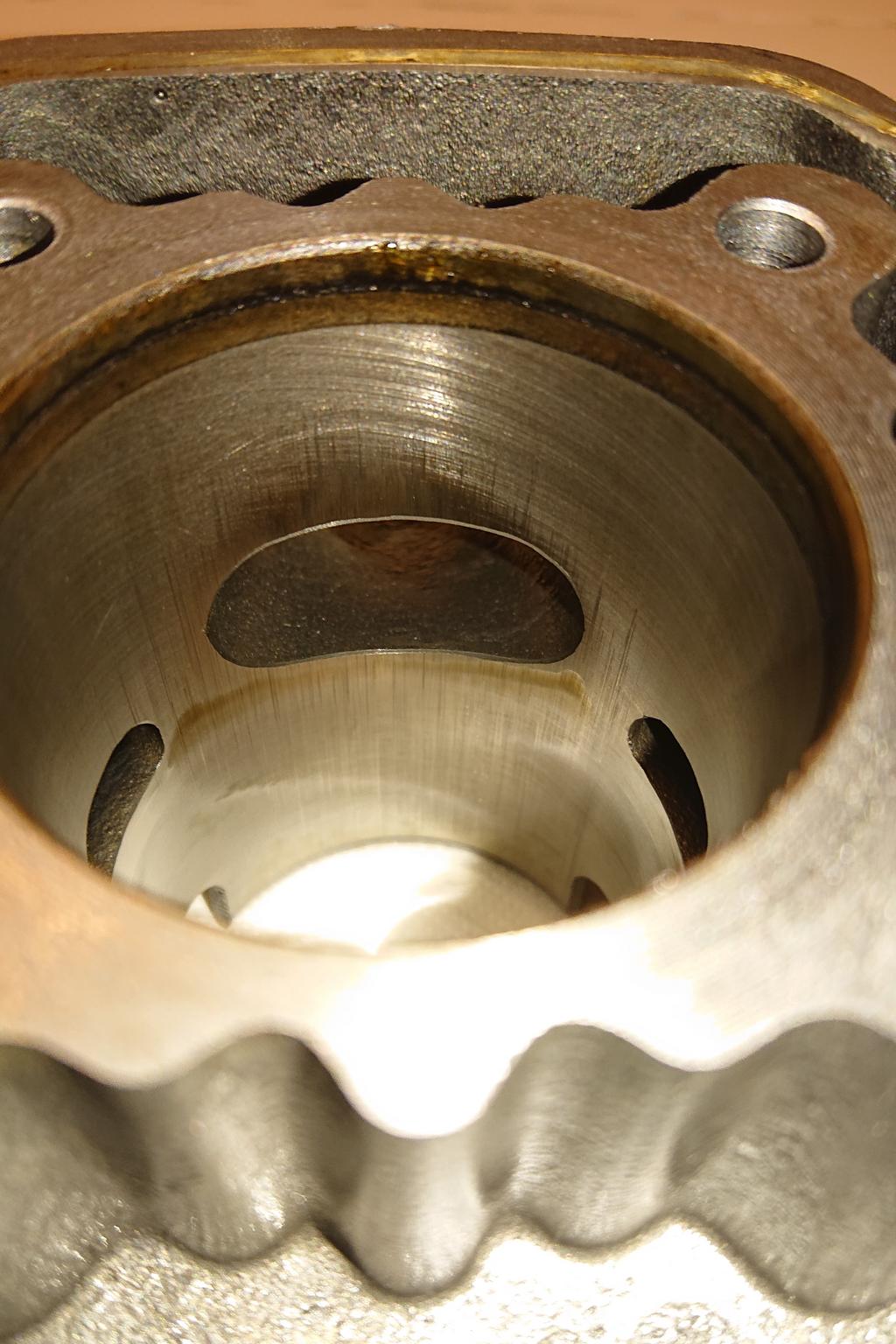 also on back transfer: 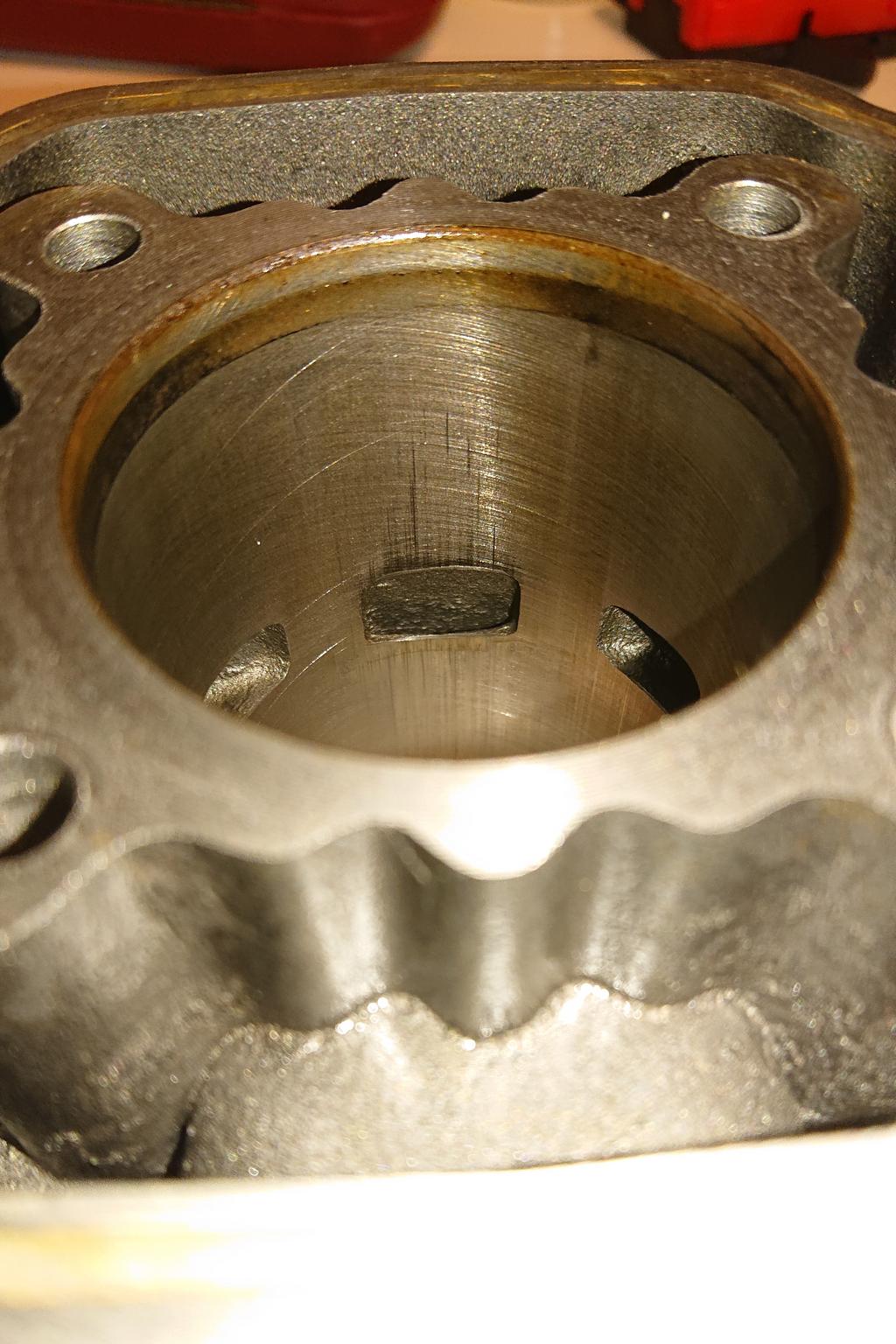 almost no scoring at sides: 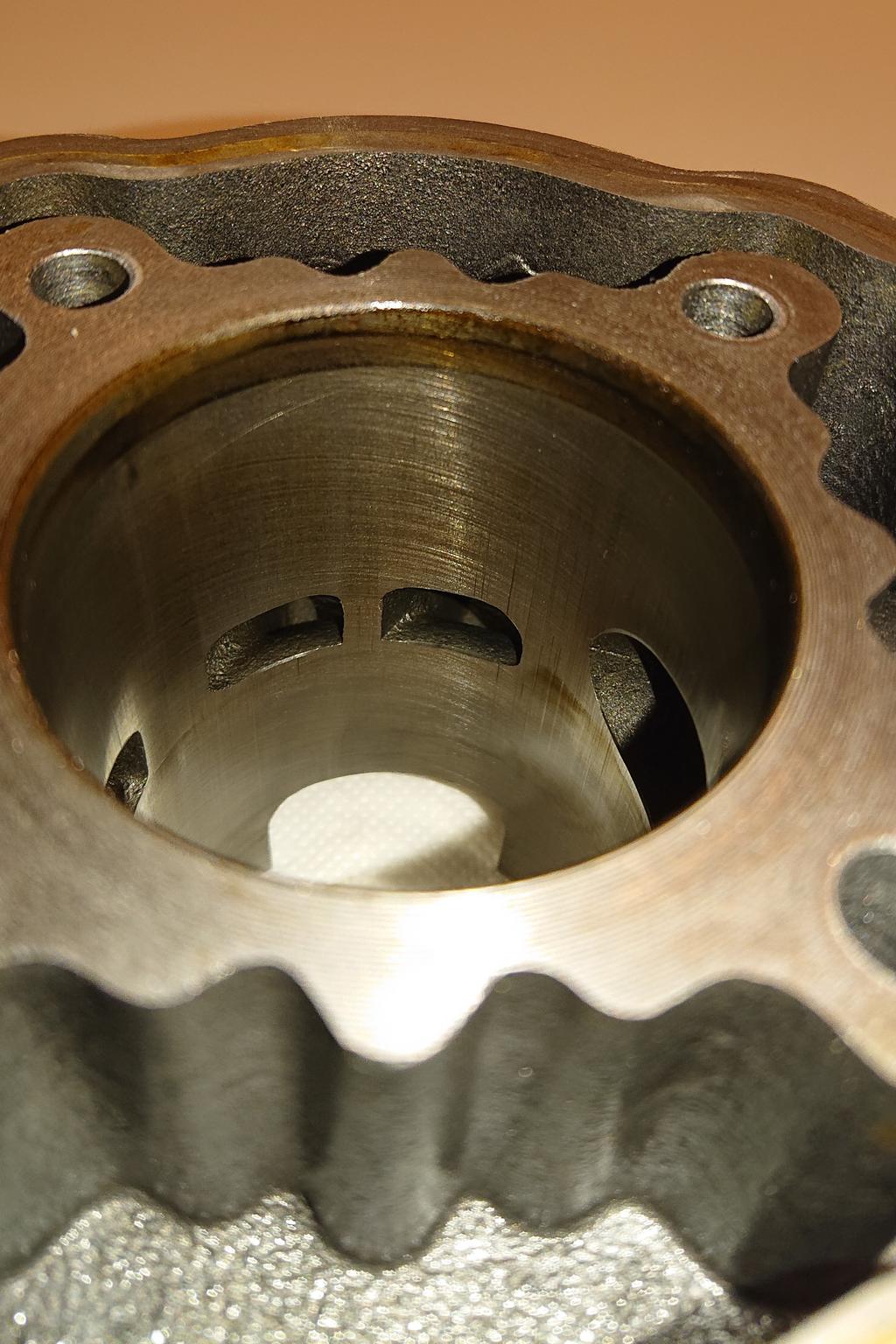 Is this accepatable or too much scoring during run-in?
0 x
Top

How much time is on it?

I've seen some 2-stroke race engines, that were very fast, with much more scoring.

You could hone the cylinder, but not sure if it's necessary.

What oil are you using? Premix or injection?
0 x
Top

It's about hour and a half running since rebuild.

We might also consider that the oil pump on these engines are pretty much limited to providing a fixed ratio of oil, based on engine RPM, and (in most cases) throttle position. As you've set the throttle cable to pull the pump to wide open at lower RPMs, well... your results will vary.


Steve, at AF1 indicates that:

"... The two stroke masters at AF1 did some tests a little while back and they discovered that the oil pump mixes in 2.5 ounces (74mL) of oil for every gallon of gas that is burned. This yeilds an overall ratio of 51.2:1. Additionally, your Aprilia RS50 owners manual states that the oil pump mixes in 1%-3% oil which results in ratios ranging from 100:1 to 34:1 depending on engine rpm. ..."

In the same thread, Steve goes on to say:

"...The oil pump provides oil in proportion to the position of the throttle. At wide open the pump can give a maximum ratio of 34:1. If you were to somehow lock the pump in the full open position, I suppose you could rely on it for nearly all of your oiling. Testing here has shown that 32:1 is the safe ratio for bikes that are frequently run above 11,000rpm. While 34:1 is certainly close, it is still not the minimum safe premix ratio.

If another oil pump exists that bolts directly on and has the same opening ratio as the stock pump, I do not know of it. If you can't find one that bolts directly on, you will need to fabricate (at the very least) a custom bracket, and quite possibly a custom oil pump driveshaft of some kind. You would also have to gear the oil pump proportioning arm to open from full closed to full open according to the travel of the stock oil pump cable.

It is a lot of extra trouble to go through when you could just carry a travel sized shampoo bottle of two stroke under your passenger seat an add those 1-2 ounces every time you fill up.
..."

At the end of the article is he suggesting supplementing the pumps output with a moderate amount of premix?

Hadn't though of that.

Is the injector oil ok to use as permix? I wouldn't think you would want a different oil than what's being injected.
0 x
Top

RJ, thanks for extensive reply. I think I've once read about this on aprilaforum.com... If i'm not mistaken, Steve of AF1 talks about oil pump on first generation RS with Minarelli engine, which are Mikuni brand, and are little different (maybe better). Oil pump on Derbi engine, which all Aprilias (2006>) have, are no-name (actually it's Pricol, that's Indian company, never heard of it...) Maybe earlier models used some other brands, I don't know.

I've found some information on german forum 2stroke-tuning.com, the problem with this pump is not just that you can only guess how much oil it delivers, but that it simply wasn't designed for high rpm. Common EU restricted (30mph) EURO3 model of RS/RX/SX has peak power at cca. 6000rpm... And there is much more rare model for Swiss market, which is supposed to be registered as A1 (motorcycle). It has different carb settings, no exhaust restriction and peak power at 9000rpm. And they both use the same oil pump, so it must be fine for use under 10.000rpm. But if you have setup which continuously rev well over 10.000rpm, you will destroy stock Derbi oil pump very quckly. It just can't hold that much internal pressure and will start to leak out...

Apologies for the confusion, I stated this poorly. The oil delivery does indeed vary, based on engine rpm, and throttle position
1 x
Top 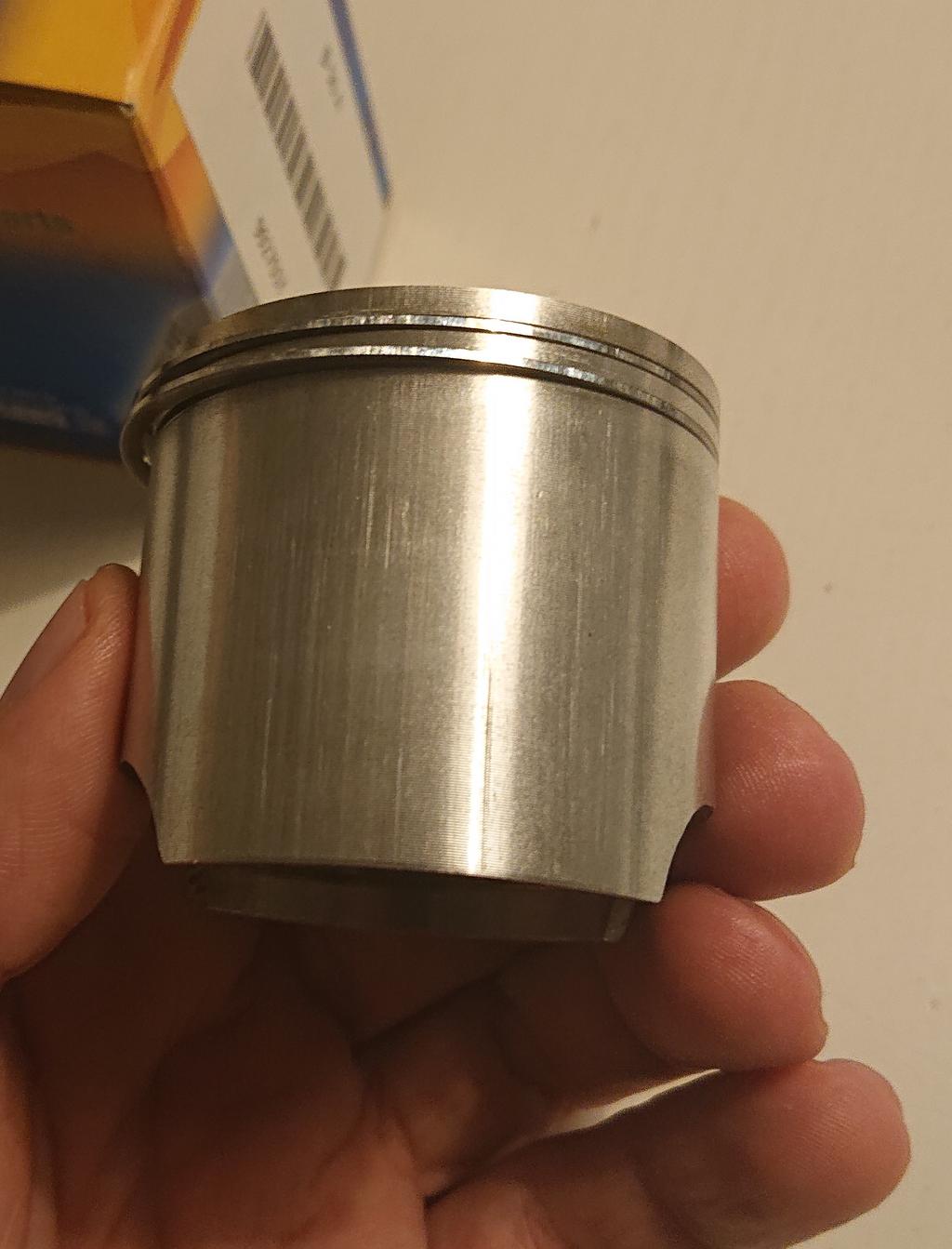 There is more scoring at the bottom of the piston skirt. That's doesn't look catastrophic, but I still don't know what caused this. Is this over-heating because of temporary lean condition (caused by air-leak)? Or is this caused by simply insufficient lubrication (oil pump?)...

Hi Jaxx.. Im kind of having the same issues , bike wont idle and is hard to start... scratching my head.
0 x
Top

It's probably because it lacks compression because it seized previously. Since I fixed my air leak I have no problems with starting or idling, just trying to figure that scoring out.
1 x
Top
Post Reply
45 posts